Wednesday, 25 May 2022
You are here: Home American made jerky treats tied to illness in dogs 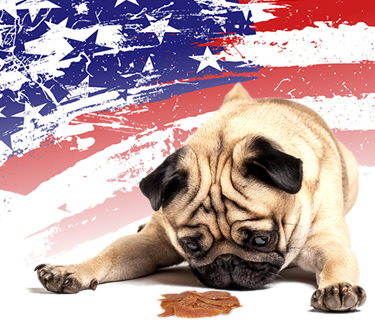 I am so glad I came across this article. This is really scary and made me realize how important it is to research and stay informed on current developments on pet products.
I thought that the concerns related to jerky treats were confined to those made in China and made with chicken. It appears this is not the case!

Dogs fed jerky-style pet treats labeled as made in the United States are turning up with a rare kidney disease that’s been associated with jerky made in China.

A U.S. Food and Drug Administration spokeswoman confirmed Friday that the agency is “aware of complaints related to ‘USA’ made products.” Siobhan DeLancey of the FDA’s Office of Foods and Veterinary Medicine said: “We have found some of these products may contain ingredients from outside of the U.S. FDA continues its investigation into these, as well as other, jerky treats potentially linked to illnesses.”

Dr. Urs Giger, director of the Metabolic Genetics Screening Laboratory at the University of Pennsylvania School of Veterinary Medicine, said his laboratory has diagnosed recent cases of acquired Fanconi disease in dogs that ate treats that ostensibly were not made in China or with ingredients from China.

Since 2007, the FDA has been receiving complaints of illness in pets, predominantly dogs, that ate jerky treats. The phenomenon became commonly understood as a Chinese-chicken-jerky-treat problem because most of the products were chicken-based and made in China. Until recently, virtually all chicken jerky for pets was imported from China.

FDA and other investigators have been unable to identify a contaminant in the implicated treats or other reason for illness. But public pressure led many companies selling treats to shift or establish manufacturing operations in the United States within the past year or two.

In February, the FDA reported that the rate of complaints it received involving jerky treats slowed between May and Sept. 30, raising hopes that the problem might resolve on its own. Whether that trend has continued since then is unclear; the agency has not posted an updated tally.

One thing is clear: Veterinarians still are seeing cases of jerky-related illnesses. Dr. Bonnie Werner, an internal medicine specialist at Animal Emergency Medical Center in Torrance, California, for example, is treating a 2-year-old Yorkshire terrier who was referred by her regular veterinarian. The dog was sick with vomiting and diarrhea for more than a week prior.

According to Werner, tests showed the dog had impaired kidney function and glycosuria — glucose in urine — which are signs that point to acquired Fanconi disease.

Werner said the dog’s owner was aware of the link between jerky treats and illness but thought that products made in the U.S. were safe. As a regular treat, the 5-pound terrier was given Spot Farms “all-natural chicken strips,” Werner said. The strips are described on the product website as made from “antibiotic-free chicken raised on family farms in Kentucky.”

Werner said she called the company’s customer-service line the first day she saw the patient. “The representative just kept repeating that the chicken was raised in Kentucky and that all the other ingredients were sourced from U.S. companies,” Werner said in an interview by email. “She did not have any information on whether those companies use ingredients from overseas.”

A spokeswoman for Spot Farms, contacted by the VIN News Service on Friday, was unaware of the veterinarian’s phone call and the case of illness.

Julie DeYoung, a member of the media-relations staff for the chicken-producing company Perdue Farms Inc., which owns Spot Farms, said in a written statement: “We are deeply saddened to hear of this dog’s illness. We … (do not know) the circumstances regarding the dog’s illness or whether our treats were a factor. What we do know is that we have never received any reports of serious illness since we launched Spot Farms dog treats in 2013.”

DeYoung noted that the treats are not meant to be fed in large quantities. “Because we do not use any fillers in our chicken strips, our treats are very high in protein,” she wrote. “It is always important, especially with smaller dogs, to adhere to the feeding guidelines by dog size printed on the back of each bag.”

In a follow-up telephone conversation Monday, DeYoung said the company is trying to determine why Werner’s call to customer service wasn’t forwarded to managers as called for by the company’s “standard procedure if we receive a call relating to a sickness.”

DeYoung added that the company has since spoken with Werner as well as the dog’s owner. “We’re gathering information that will hopefully allow us to evaluate whether our treats are the cause of this illness. We’re highly motivated to understand what happened here, and what role, if any, our treats played,” she said.

On Friday, Werner said she intended to report the case to the FDA but had not yet done so.

She said the Yorkshire terrier requires intravenous fluids to bring her kidney function near normal. “Her kidneys have not repaired themselves yet,” Werner said, adding that the pet’s future is uncertain because her owners have reached their financial limit for treatment.

Not only are cases continuing to occur in the United States, instances of jerky-associated Fanconi have begun turning up in Europe, as well.

Giger, the metabolic genetics lab director at UPenn, said, “We have recently received samples from Europe where we confirmed an acquired Fanconi syndrome and associated it to jerky-treat consumption, and reversal (of illness) or improvement following withdrawal (of the treats).”

Only two years ago, during a talk with clinical pathologists in Berlin, Giger found that “they had not even heard or seen a case.”

Giger co-authored a report of the first jerky-related case of Fanconi in Europe to be recorded in a scientific journal. Involving a 5-year-old male border terrier, the case was published April 5, 2014, in Veterinary Record, the journal of the British Veterinary Association. Every day, the dog ate various beef and chicken jerky treats, some of which contained ingredients originating in China. His clinical signs improved four weeks after he no longer was given the treats. By 19 weeks after he first took ill, the owner reported that the dog was completely normal.

As a geneticist, Giger encountered the jerky-treat issue through his work on hereditary Fanconi syndrome. His laboratory has provided Fanconi screening for decades, he said. Historically, Fanconi in dogs was a well-recognized genetic disease in basenjis. Around 2007, Giger said, the laboratory began seeing cases of Fanconi-like syndrome in other breeds, mostly small-breed dogs and mostly related to jerky consumption.

Between 2009 and 2012, Giger said his lab identified 400 cases of Fanconi. He said he continues to see new cases weekly, amounting to about 100 per year.

Whether American-made treats are less suspect than or equally suspect as Chinese-made treats is impossible to say, Giger said, because labels tend to tell an incomplete story.

“When you’re looking at pet jerky-treat products, and I’ve checked shelves at stores, the label does not necessarily say where it came from,” Giger said. “It (identifies) the company but not where it was manufactured or where (all) the ingredients came from.”

If a marketer claimed a product was made from ingredients that originated solely in the United States, he said, “one would have to check on that very carefully, as manufacturers may have sourced ingredients through third parties.”

Asked whether jerky inherently might make some dogs sick, Giger said he thinks not, because he’s seen cases in which dogs ate homemade jerky without becoming ill, then became ill when fed commercially manufactured jerkies.

He speculated that homemade jerkies would be softer in texture than mass-produced treats, which he said likely are subject to any of a variety of processes, possibly including marination or irradiation.

Giger added that treats associated with illness aren’t necessarily identified as jerky, but may contain jerky and be called sausages or biscuits or something else.

In light of the ongoing mystery, Giger suggested that pet owners consider refraining from giving any commercial jerky treats to their pets. “While some may think pets cannot be without jerky treats, I do not consider them as part of a healthy diet or treat, even when labeled ‘all natural,’ and thus, currently do not recommend any,” he said.

Success! Now check your email to confirm your subscription.

Expert Dog Lover! Favorite Perfume: Puppy Breath. Heaven to me is snuggling with my hubby, surrounded by my furbabies! (and maybe a big piece of tres leches!)

Subscribe to get the latest Pet Food recall alerts and mobile app updates.

Success! Please check your email to confirm your subscription.

What is the Safe Pet Treats Mobile App?