Thursday, 1 December 2022
You are here: Home All About Our Girls! 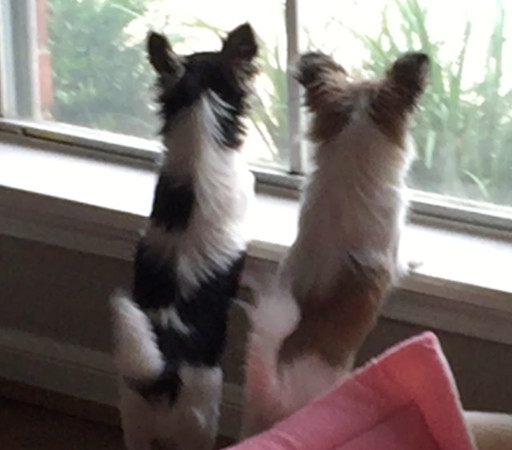 I have always had a very soft spot and love for animals.  They are truly my joy and I feel so lucky to have them in my life. I always hope I bring them as much happiness as they bring me!

I am also so very fortunate to have my husband David in my life.  He understands how important my “kids” have always been to me, and in turn, they have become just as important to him.  I think we all kind of snuck up on him, and before he knew it he was hooked!  He is so protective of all of us and does everything he can to ensure that we are safe and happy.  That protectiveness is where his initial ideas of Safe Pet Treats were born.

Right now we have just 3 little girls, so in my mind we have room to grow!  They are all beautiful Chihuahuas.

Trixie is almost 10 years old and has her papi wrapped around her fingers! She was 7 when she came to us after much debate on whether our 14 year old ChiChiWaWa was lonely after losing her two senior sisters just months apart earlier that year.  It was love at first sight for these two – truly amazing to see. We had expected twith two older girls that we’d have to really work with them on Trixie’s transition into our home.  That turned out to be unnecessary.  ChiChi’s face just lit up the first time she saw Trixie.  She seemed to be letting us know we had made the right decision.  We were so relieved to see her happy again and not lonely for a buddy in her later years.  After almost two years of witnessing this special bond, ChiChiWaWa crossed to the Rainbow Bridge at 16.  We missed her so much and knew Trixie did, too.  We knew we would want and need to get her a little sister, but it was too soon.

It’s funny to see David, who thought he wanted big dogs, be so manipulated by this little Chi baby! She is definitely a daddy’s girl.  Trixie Marie loves belly rubs, and immediately rolls onto her back anywhere she is to let us know it is time for one. She will actually paw and sometimes kick David if he doesn’t do it how she trained him!  She’s a goofy, headstrong little girl who knows her own mind.  She behaves and listens very well…if she feels like it.  She is usually the winner in a stare contest, but if not, her tongue is lightning fast like a lizard and she’ll get your nose!

Josie is 10 months old and joined our family at 12 weeks old.  She is the most energetic and vocal dog-child I’ve ever known.  She’s not a barker, but she’s a “talker”!   Little did I know the first time I held her and heard her “speak” that it was not an anomaly or concern over a stranger picking her up, nor that she would rarely stop!  She makes sounds like a monkey when she wants your attention.   She gets almost overexcited at times and has to be held close and talked to soothingly to calm her down. For some odd reason (I have no idea where it came from) I started singing Bicycle Built for Two to her, with her name, and to our amazement (especially David’s because of my voice!) it calms her down. If she is scolded or told no, she groans and sounds like a child saying ‘Awe, man’.

We had planned to add to our family, but with the two girls already we wanted to wait a while.  We were soon concerned though because of the age difference – Josie was a bit much for Trixie to handle!  Josie needed a playmate closer in age to keep up with her.  She would start pacing and “talking” to herself; it sounded like she was saying “Ooh, I’m bored, there’s nothing to do!”, so we decided not to wait.  Yeah! I was so excited.

Soon we were off to pick up 7 month old Pippi Squeak!  They are a perfect match, these two little peas in a pod!  Like Josie, she has the extreme energy, is quite feisty and playful, and a wee bit bossy, but just kind of melts as soon as she is picked up.  I’ve never seen a tail shake so quickly and constantly!

She was so tiny we started calling her Pipsqueak just as a nickname before we picked her real name. But it turned into Pippi and just stuck! The name suits her in many ways. Usually, a squeaky toy might accidentally get squeezed once or twice, but Pippi finds that squeaker in a toy and goes to town on it!  If we’re watching a movie we have to pause until she’s done because you can’t hear a thing! And if she thinks she’s missing anything, she voices her concern with some very high pitched squeaks! The Swiffer also elicits this response. Early on she decided she would rule the roost! Though at first Josie seemed a bit perplexed at how this tiny thing could be so noisy and pushy, we noticed she is always a very patient big sister.  A nice surprise for us proud parents!

Success! Now check your email to confirm your subscription.

Expert Dog Lover! Favorite Perfume: Puppy Breath. Heaven to me is snuggling with my hubby, surrounded by my furbabies! (and maybe a big piece of tres leches!)

Subscribe to get the latest Pet Food recall alerts and mobile app updates.

Success! Please check your email to confirm your subscription.

What is the Safe Pet Treats Mobile App?